The Science of Mindfulness

An explosion of scientific studies has proven the many benefits of mindfulness, as a tool for stress resiliency.

Thousands of studies have shown that mindfulness training reduces stress, anxiety and depression while improving the immune system and the cognitive skills that are key to high performance. Much of this research focuses on neuroplasticity (the brain’s ability to change in response to experience and training... like meditation) and the relationship between the “thinking brain” (prefrontal cortex) and the “emotional brain” (amygdala). When these two parts of the brain work together well, people act calm, thoughtful and reasonable. When they don’t, people act stressed, unhappy and tend to lose their cool. (source: Whil)

People undertaking mindfulness training have shown increased activity in the area of the brain associated with positive emotion – the pre-frontal cortex – which is generally less active in people who are depressed. 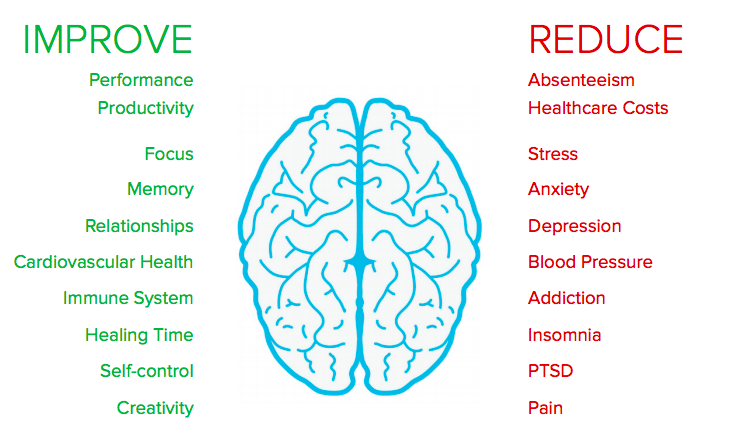 Many studies have shown changes in brain wave activity during meditation and researchers have found that areas of the brain linked to emotional regulation are larger in people who have meditated regularly for five years or more.

Mindfulness is part of several evidence-based therapies, including:

These therapies are now widely used by psychologists in individual and group sessions.

Get in touch today and learn how we can help you bring mindfulness to your workplace for improved professional performance and personal wellbeing.
Contact Us
We suggest moving this party over to a full size window.
You'll enjoy it way more.
Close
Go Fullscreen